I have never visited the Channel Islands before and certainly never sailed there so I was quite excited at the prospect of visiting Jersey and Guernsey in one hit. Before we (Steve, Peter, Mike and I) got there however, there was a channel crossing to negotiate to Cherbourg – my first as a skipper. After many months of cutting out small strips of cardboard or plastic to assist with the Reeve-Fowkes calculations the day was finally upon us. I was delighted to see that Steve had similarly fashioned strips but, being the Lead Mentor, he was one up by having different versions (depending on boat speed)! 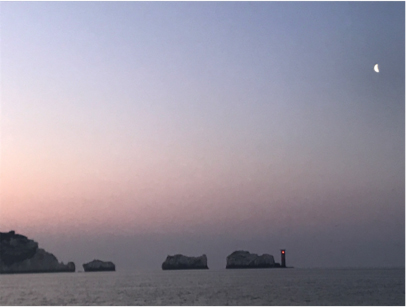 I arrived at Port Solent with a metric ton of provisions to see a shining Carina of Solent sitting proudly in the berth. Gleaming deck, toe rail and gel coat and a new set of sails. After a shakedown from Port Solent to Yarmouth on Thursday 28th March, we got up early to be at the Needles at roughly high water on the Friday. Luckily no fog was present so we exited Yarmouth at 04:40 and motored down to the Needles to be at Bridge for 05:40 HW. The sight of the Needles never disappoints me – they say a picture paints a thousand words so see the photo.

Despite the prospect of little wind, we actually had a very pleasant F3-F4 a few hours into run and, because of the ENE direction, we decided that the gennaker should get an airing. We achieved a good 7kts boat speed with the gennaker up and flew the kite for most of the way across. Commercial shipping was kind and altered course to go astern of Carina as we crossed the lanes north of France. It took about eleven hours or so before we approached a murky Cherbourg but the tidal calculations held true and we arrived a little uptide at the Western entrance to the Grande Rade. The pilotage was relatively straightforward as was the berthing in Chantereyne Marina.

After a rest day on the Saturday in Carteret (to take in some of the local cuisine – excellent fish and seafood as you might expect), we exited Cherbourg to round Cap de la Hague bound for St Peter Port in Guernsey. The wind piped up, Peter was in charge and we had a great sail down the Little Russell taking in all the unusual channel markers. Steve informed the crew of the friendly rivalry between Jersey and Guernsey on the way in so when the harbour master said “Welcome to Guernsey”, I couldn’t resist saying “Guernsey, we wanted to go to Jersey!” I don’t know for sure but he may have heard the gag before judging by his reaction. St Peter Port and Guernsey were very picturesque and a ’round-the-island’ bus tour at low water showed the sort of rocks lurking beneath the water line if you stray too far from the plan!

No peace for the wicked and we had an early start to move Carina out over the cill before departing for Jersey on the Monday. The winds were light so it was a mix of sailing and motor sailing but a very pleasant run nonetheless. The pilotage round the south side of Jersey is interesting and we hit St Helier marina right on time for the cill. Peter and I felt an evening stroll was in order to walk off the evening meal and we took in the air in St Aubins bay. As you can see, a fairly stunning walk and sunset.

A later start the following day and we exited St Helier bound for St Cast-le Guido in France. This, as Peter alluded to in his blog “What Ferries Do On Their Day Off”, was the highlight of the week for me. A beat to windward in a stiff F4-F5 W/WNW to the NW Minquiers NCM then a turn onto a run to SW Minquiers WCM and onward to St Cast. The wind was light for the Devon cruise with Mike and Co. last year and I had only sailed Carina in the Solent. What a ride down to St Cast – Carina handled beautifully with the reefs both upwind and downwind. The image doesn’t really do the sea conditions justice but it was a beautiful spectacle of waves to surf down!

I think we all would recommend St Cast as a stopover. Nice new marina and a friendly bunch of people in town. After a couple of fairly lardy Crepes, we took the air back to the marina. The following day (Wednesday) it was a short run to St Malo, via a man overboard drill (for my skipper checkout), and the entertaining pilotage through the rocks on the approach to the port.  In the evening, after a meal on board, we decided that more calories were required so we headed into St Malo for dessert. Steve had a lively Crème Brulee!  We then got the ferry back to Portsmouth on Thursday, leaving Carina at St Vauban Marina in St Malo. So 222 miles covered in seven eventful days.

Tops’l is a remarkable cruising club. For someone like me who is hoping to progress to Yachtmaster, I can kill two birds with one stone by getting the miles and qualifying passages whilst having a holiday and some fun with other members. Two other distinct plusses are the sheer quality and condition of the Yachts (Carina was in fine fettle for the trip) and also the mentoring from longstanding members like Steve, Mike and Peter. I learnt a huge amount in the week (as indeed I did last year in Devon with Mike and Adrian S).

I have another pass out from the family to go to Largs later this year……I am very much looking forward to another great cruise with Tops’l!

With reference to the latest COVID-19 announcement, the Government has moved all of England under lockdown. The lockdown states that people must not travel unless absolutely necessary. On that basis, we are asking members not to sail the Tops’l boats. We are looking forward to getting back out on the water as soon as it is safe to do so.
Regards
Tops’l Directors
COVID-19 announcement: https://www.gov.uk/guidance/national-lockdown-stay-at-home

Tops’l is a remarkable cruising club. For someone like me who is hoping to progress to Yachtmaster, I can kill two birds with one stone by getting the miles and qualifying passages whilst having a holiday and some fun with other members. Two other distinct plusses are the sheer quality and condition of the yachts (Carina was in fine fettle for the trip) and also the mentoring from longstanding members like Steve, Mike and Peter. I learnt a huge amount in the week as indeed I did last year in Devon with Mike and Adrian.

Click/tap >here< for the full story